After dinner with our friends and a little shopping – particularly for our new-found fruity friend, the pummelo – we returned to the hotel.  It was getting close to bed time for John, but we still had time to play a little anyway and to open a present he’d received from the Ramos’.

First, we opened his present.  Joel and Cherry had given him a Philippine coconut which had been hollowed out (I still don’t know how) and a slit added to turn it into a bank.  Inside, they had already placed a single Philippine Peso from the year of John’s birth.  This is evidently a tradition in the Philippines.

So, eventually, all John’s left over Philippine coins went in his little coconut bank.  Here’s a picture of his playing with it after he opened it.

John and his Coconut Bank

Next order of business was John’s shower.  After mom and John both got ready for bed, she helped him floss his teeth.  I included this picture, because he is just SO cute.  This might have been the first time he flossed his teeth.  He did really well.

John and Mom Flossing Their Teeth

After getting ready for bed, it was play time.  In order to fully appreciate this story, you have to understand John’s affinity for bellies.  We had quickly learned that John had a thing for them.  He loves to be tossed over daddy’s shoulder like a “sack of potatoes”, but when he is, he’s always reaching for the belly.  Or, whey he runs up to either of us, he will try to stick his hand under one of our shirts and go for the belly button.  Go figure!

Well, during play time, John got it in his head that he would stuff coins from his coin purse – one of his favorite toys at the moment – inot mommy’s belly button.  So, mom laid on the bed, and John built a tower of nickels and dimes on her bare belly.  Jeff was rolling his eyes – and videotaping – the entire time.  Here’s the (hysterical) video I shot from our little digital camera:  Get in Mommy’s Belly (Facebook account required to view). 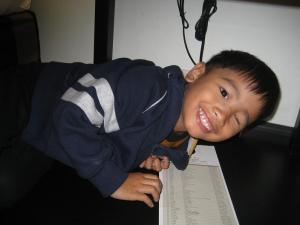 So, we’re cruisin’ along having all kinds of fun with bellies and coins and video cameras, and all of a sudden (not on video), John bounces right off the bed and hits his head on the night stand on the way down to the floor.

Now, you have to understand that at this point, we had been living in fear for days that John would totally lose it in the hotel the way he had two or three times at the orphanage.  In those cases, it seemed like no matter what we did, he just screamed and wailed and cried inconsolably.  More than one night, after John had gone to sleep, Faith and I had discussed our fear that if he let loose on one of those tantrums in the hotel, that we wouldn’t know what to do.  We had nightmare visions of John’s screaming and wailing in the hotel room and half the hotel calling security.  Next thing, we’re in some kind of Philippine gulag accused of abusing our little boy with no hope of ever seeing air conditioning again.  I guess it didn’t help to have read/heard, in preparation for adoption, all the stories about adopted children accusing their parents of abusing them or screaming “Don’t touch me there” in Wal-Mart or other such horror stories.

I guess, given that we had to read up on stories like this, that it’s not surprising we were paranoid.  Of course, just becaues you’re paranoid doesn’t mean that they’re not all out to get you.  In this case, just because we were paranoid, didn’t mean John wasn’t going to lose it in the hotel.  So here we were, with one day left to go, and John falls off the bed.

He wasn’t hurt.  He just bumped his head a little.  You know how children can get startled, and that scares them as much as they are hurt.  This one of those times.  However, both out of concern for John and out of fear he would start crying, I scooped him up to try to console him.  I got him halfway into my arms and he started flailing, trying to get away from me.  I lost my grip, and he flops out, bounces off the bed, and falls to the floor again, this time landing on his head.  And immediately, he opens up like a combined siren and waterworks.  Tears, screaming, the dejected “I’ll crawl under the bed and you’ll never get me out” look we remembered so well from one of his tantrums in the orphanage … all the makings of our worst hotel-tantrum, paranoia-induced nightmare.

It was Papa Sadiri and Chosen Children Village that saved us.  If you remember back to our time at Shekinah, when John lost it just before church the Sunday before.  Sadiri and Auring had basically ignored his tantrum, and forcibly got his coat on and just moved him on to the next activity.  Later in the car, they had explained that this was the way to handle John … not to try to console him, but just to move on.

Early today at Chosen Children Village, when he got jealous over Faith’s holding the baby, and threw a fit, I’d taken their advice.  I scooped John up, and after a brief (futile) time trying to console him, took him outside and started playing on the playground.  He forgot all about being mad, angry, jealous, sad, scared, or whatever it was, and just played.

So, here we were in the hotel.  It’s like 10PM.  The waterworks are flowing.  John’s wailing.  The calls to the secret police had no doubt started.  Faith, didn’t hesitate.  In true super-mom form, she scooped John up in one hand, lunged for the door to the hotel room, and opened it with her other hand.  Before our neighbors could even finish dialing child services, she was out in the hallway getting him to punch floors on the elevator (which he loved to do).  I barely even got to them before John had stopped crying and totally forgotten he was supposed to be getting us arrested.

Whew!  What a relief.  When I finally caught up with super mom, I looked at her adoringly.  She looked at me like, “Please take your son and wander around in the lobby for a while so I can sleep.”  No problem.  She’d averted crisis.  The least I could do was give her some quiet time.

So, John and I wandered the lobby for a while.  He was a little on the reserved side at first, but eventually snapped back and made me climb the stairs a dozen or so times.  No wonder I came home a few pounds lighter from the Philippines … well that, plus all the dishes based on charcoaled catfish, sour broth, and bitter vegetables.

Eventually, John and I returned to the room, and mom was in bed but not asleep.  We put him down, and chatted for a few minutes about how amazing Faith’s scoop-up-and-avert-tantrum skills are, and I let her go to sleep.  I, of course, was off to the computer lab for more blog time.

Lover and follower of Jesus, the long awaited King. Husband and father. Writer and seminary student. On a long, difficult, joyful adventure, learning to swim with the current of God's sovereign love and walk with Him in the garden in the cool of the day.
View all posts by Jeff Block →
This entry was posted in Adoption, Family and Friends, Travel and tagged Anger, John Block, Parenting, Philippines. Bookmark the permalink.