October 9th was dominated by one theme: preparing to return home.  We ate our classic breakfast buffet at the hotel, then headed over to the mall for sovenier shopping.  After being exposed to such great stores at the “new” mall (the one we hadn’t been to) the night before, we decided that it would likely be one-stop shopping for us.  So, off we went to Kultura to get started.

We shopped there for like two hours – easily long enough for John to be totally bored out of his mind.  I’m terribly indecisive when it comes to this kind of thing.  Also, when I’m really hungry and have to choose something to eat from a large menu.  I’m fairly incapacitated by (what I unfortunately have to admit is) the fear of choosing “the wrong thing”.  Shopping at Kultura was no different … Are we spending too much?  Will so-and-so like such-and-such?  If we get this person this, will that person feel slighted that we got that?  Plus, we had already purchased a few things along the way through the trip – such as during our day trip to the Ilocos Norte museum and Fort Ilocandia while up north near Laoag City.  So, the decision-making process was further complicated by trying to remember what we had previous purchased, who it was for, how many we got, why we got it, etc.  Ugh!  Made me (and still makes me) want to just tell all my friends and family that we love them but we’re not competent enough to shop for them while traveling.  Then again, I guess I just did.

So after spending a grand total of P6200 (about $100 – which I only mention because it’s amazing how much we bought for that little cash)  on everything from serving platters to figurines to picture frames to smaller gifts for the children of neighbors, friends, and family, we were finally ready to move on.  I think John was on his third anurism by this point, and mom and I were beginning to lose patience with him as well.  Hours of shopping with mom and dad is not the way to a 4 year old’s heart, I have to say.

For the record – and for John’s memory when he reads this 10 years from now (the real reason I’m recording all of this), we bought some really cool stuff.  We got picture frames for parents and siblings, which we knew we’d fill with fun pictures of our trip.  We got a carved wooden statue of a Philippine eagle, the 2nd largest in the world (the eagle, not the statue) for my dad.  We got coin purses and other little trinkets for lots of kids in our lives.  We got some simple serving platters and bowls for friends.  And a whole bunch of other stuff, I’m sure, that I just can’t remember at the moment.  We also purchased a really awesome rice serving dish and spoon – wooden bowl and spoon with a glass lid – for us, and a picture and woven scroll to hang on the wall.  We were adament in going over there that we would purchase art and/or a few random other artifacts so that when John becomes more aware that he is in a foreign place, that he has a taste of home to remember it by.

Okay, enough Kultura.  After that, mom distracted John with the all-powerful, all-enticing siren’s call of the escalator.  She kept him busy for quite a while – made longer by a resurgance of my fear of choosing wrongly – as I shopped for transformers at the mega toy store in the mall.  Our thought was that if we gave John a transformer when he got on the plane that he would be SO distracted by the wonders of modern toyhood that he wouldn’t even notice the 24+ hour trip home.  Yeah, like that worked, but I’m getting ahead.

Once reunited, we headed for the massive food court to have lunch.  I think Faith sneaked a quick pummelo run in on the way there, but it’s all a blur.  She was quite the fan (so was John), so it wouldn’t surprise me.  It’s too much like grapefruit for me to get my fries to covered in chili.  But I digress…..

So, at the food court…  I was more than a little frustrated with Faith, because she seemed to be pretty scatter-brained.  First, we didn’t know where we were eating.  Then she couldn’t get a table.  Then there were bathroom runs to make.  And all the while I’m loaded down with GIANT bags of souvenirs.  I don’t remember any more detail than that, just that I was frustrated.  I’m sure it had as much if not more to do with a long morning of shopping and John’s starting to get roudy than it did with anything Faith was doing.

We got John and Faith Jollibee, and I tried something else I don’t remember, but remember thinking that it wasn’t anything to write home about.  Of course, John and Faith were both prepared to write home about the Jollibee spaghetti and fried chicken combo!  Faith absolutely loved their fried chicken, and John is pretty much all about fried chicken and/or spaghetti wherever he can find it.  And if I had a peso for every time Faith commented on how much she liked the rice with her meals, even fast food, I’d have a whole dollar (which is saying something).  Not that I’m complaining; I happen to agree.  But anyway…  Once we were sitting down and chilling out, all our moods greatly improved, which was my favorite part. 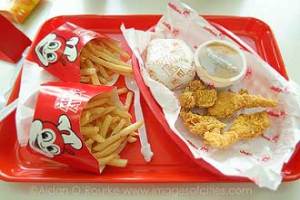 After lunch, it was back to the hotel.  Dad set about the daunting task (but I love this stuff) of getting us all packed up and ready to head back to the States.  And it was better for everyone involved – more fun for everyone – that Faith and John went swimming.  It was sunny and warm and the last opportunity for many months they would have to bask in the sunshine, heat and water.  Plus, we had to rearrange toys and other supplies that John had yet to be exposed to, as we had been saving them for the long ride home (we were so prepared!).  AND, everyone knew that the mess that would be created in that little hotel room to get us packed up wouldn’t be made better by tripling the number of people in the room.

Upon completing the packing, I joined them by the pool, but didn’t get in.  I wasn’t there long before the sun (and my personal tendencies independent of the weather) drove me back inside to the business center to play with Facebook, my blog, and other glorious technology.

Eventually, after they had had their fill of sun and pool, and I’d finished a blog entry or two, we headed back over to the mall.  Faith wanted to check out Philippine cookbooks and other books on the Philippines (for both John’s and our educations).  We hung out in the bookstore for a little while, John on my shoulders most of the time drawing “aww, how cute!” looks for passers-by.  Faith picked up a couple books, and I definitively declared that all this shopping for cookbooks was making me hungry.  We ate at TGI Friday’s in the other mall, which was really fun family time, and then headed back to the hotel.

Lover and follower of Jesus, the long awaited King. Husband and father. Writer and seminary student. On a long, difficult, joyful adventure, learning to swim with the current of God's sovereign love and walk with Him in the garden in the cool of the day.
View all posts by Jeff Block →
This entry was posted in Adoption, Family and Friends, Travel and tagged Adoption, John Block, Philippines. Bookmark the permalink.