The Love of God… Is With Us

In him was life, and the life was the light of men.

As a sinful and fallen people, darkness is our lot in life. Darkness is wherever light is absent. But light conquers darkness, and darkness is powerless to withstand it. Darkness never overcomes light; light can either shine forth and push darkness away, or it can retreat and darkness fills in the vacuum where the light once was.

In our sinful, broken states, we humans no doubt have “walked in darkness”. But the light of God’s love for us will not permit those He loves to walk in that darkness forever …

The people who walked in darkness
have seen a great light;
those who dwelt in a land of deep darkness,
on them has light shone….
For to us a child is born,
to us a son is given;
And the government shall be upon his shoulder,
and his name shall be called
Wonderful Counselor, Mighty God,
Everlasting Father, Prince of Peace.
Of the increase of his government and of peace
there will be no end,
On the throne of David and over his kingdom,
to establish it and to uphold it
with justice and with righteousness
from this time forth and forevermore.
The zeal of the Lord of hosts will do this. (Isaiah 9:2,6-7)

This was God’s plan from the very beginning. Before the foundations of the earth were laid… In the heart of God before “In the beginning…” (Genesis 1:1)… God knew how He would fix our sin problem. And make no mistake, sin is an enormous problem. Not a minor bump-in-the-road kind of problem, but a debt that is unpayable … a burden that is unbearable … the type and magnitude of problem that deceives people into gleefully racing into hell “laughing all the way”. The horrors of sin are the ultimate darkness, but God’s plan from the beginning was that His only begotten Son, the Bright Morning Star, the very Creator God, would take on human flesh and walk among us … and conquer our sin problem. His light would overtake the darkness of our sin…

And so, in the ultimate act of humility and love, Jesus came to us, for us, to be among us, to save us…

Christ Jesus, who, though he was in the form of God, did not count equality with God a thing to be grasped, but emptied himself, by taking the form of a servant, being born in the likeness of men. And being found in human form, he humbled himself by becoming obedient to the point of death, even death on a cross. (Philippians 2:5b-8)

No matter how many times I hear this story, it never gets old. Very aptly titled “The Greatest Story Ever Told”, the most amazing tale in history is TRUE. We were helplessly and hopelessly dead in our sin. No matter what we did, we could never get to God. So God, in His great mercy, His great love for us, came to us instead.

The Eternal God clothed Himself in flesh. Born in poverty and obscurity, in a dingy cave in a tiny corner of nowhere on the eastern frontier of the Roman Empire, God crashed into human history … the ultimate light to shine into our ultimate darkness …

The angel Gabriel was sent from God to a city of Galilee named Nazareth, to a virgin betrothed to a man whose name was Joseph, of the house of David. And the virgin’s name was Mary. And he came to her and said, “Greetings, O favored one, the Lord is with you!” But she was greatly troubled at the saying, and tried to discern what sort of greeting this might be. And the angel said to her, “Do not be afraid, Mary, for you have found favor with God. And behold, you will conceive in your womb and bear a son, and you shall call his name Jesus. He will be great and will be called the Son of the Most High. And the Lord God will give to him the throne of his father David, and he will reign over the house of Jacob forever, and of his kingdom there will be no end.” … And Mary said, “Behold, I am the servant of the Lord; let it be to me according to your word.” And the angel departed from her.

In those days a decree went out from Caesar Augustus that all the world should be registered. This was the first registration when Quirinius was governor of Syria. And all went to be registered, each to his own town. And Joseph also went up from Galilee, from the town of Nazareth, to Judea, to the city of David, which is called Bethlehem, because he was of the house and lineage of David, to be registered with Mary, his betrothed, who was with child. And while they were there, the time came for her to give birth. And she gave birth to her firstborn son and wrapped him in swaddling cloths and laid him in a manger, because there was no place for them in the inn.

And in the same region there were shepherds out in the field, keeping watch over their flock by night. And an angel of the Lord appeared to them, and the glory of the Lord shone around them, and they were filled with great fear. And the angel said to them, “Fear not, for behold, I bring you good news of great joy that will be for all the people. For unto you is born this day in the city of David a Savior, who is Christ the Lord. And this will be a sign for you: you will find a baby wrapped in swaddling cloths and lying in a manger.” And suddenly there was with the angel a multitude of the heavenly host praising God and saying, “Glory to God in the highest, and on earth peace among those with whom he is pleased!” (Luke 1:26-2:14) 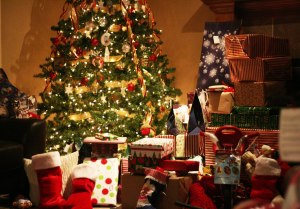 This is our God… Immanuel. God with us. The Word of God, the Light that shines in the darkness, walks among us. Even lives within us — if we will surrender to Him. So, we are no longer slaves to sin, but our freedom was purchased at the great price of the blood of the very Son of God. God is with us … IF we choose Him over everything else, God’s way over mine, God’s original plan of submission as sons to our loving and all-wise Father …

[Jesus came to our world], and the world was made through him, yet the world did not know him. He came to his own, and his own people did not receive him. But to all who did receive him, who believed in his name, he gave the right to become children of God, who were born, not of blood nor of the will of the flesh nor of the will of man, but of God.

And the Word became flesh and dwelt among us, and we have seen his glory, glory as of the only Son from the Father, full of grace and truth. For from his fullness we have all received, grace upon grace. For the law was given through Moses; grace and truth came through Jesus Christ. No one has ever seen God; the only God, who is at the Father’s side, he has made him known. (John 1:10-18)

Therefore God has highly exalted him and bestowed on him the name that is above every name, so that at the name of Jesus every knee should bow, in heaven and on earth and under the earth, and every tongue confess that Jesus Christ is Lord, to the glory of God the Father. (Philippians 2:9-11)

The greatest gift you have or will ever receive is God’s love clothed in flesh, Jesus the Christ, the Son of the Living God, our Savior. Not just the Savior of the world, but (I hope) your personal Savior … and mine … the only hope we have to walk with God in the garden in the cool of the day.

God’s gift to you wasn’t under a tree, it was ON a tree — the blood of Christ, shed for you, for the remission of sins. This Christmas, remember Jesus, whom we celebrate. God’s love for you couldn’t be more clear. 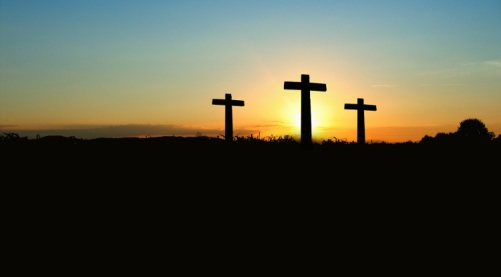 Lover and follower of Jesus, the long awaited King. Husband and father. Writer and seminary student. On a long, difficult, joyful adventure, learning to swim with the current of God's sovereign love and walk with Him in the garden in the cool of the day.
View all posts by Jeff Block →
This entry was posted in Bible Stories, Real Life, Theology and tagged Christmas, God's Love, Incarnation of Christ, Jesus. Bookmark the permalink.

2 Responses to The Love of God… Is With Us