After another difficult night’s sleep — during which I repented in sack clothe and ashes for not accepting the sleep aids that other students’ offered me — I was up early at 6. Preparing for the trip, I strongly suspected that there might not be hot water in the showers, but I was lulled into a false sense of security in Kampala. This morning, reality returned. No hot water. And the water pressure is about what I imagine it would be if a hamster was running a wheel of tablespoons around to dump water through the shower head. No towels. And the no European, detachable shower head, as in Kampala. Instead, I had to huddle my 2XL bulk up against the wall under this dripping metal shower head. So, ultimately, the net effect is that after a day of walking around in the heat and the mud lathered up with bug spray, it’s very difficult to get clean. HA! Welcome to the way life is for the rest of the world. What an adventure!

Our day started with an address by a Muslim visitor to campus, whom our guide Jordan arranged through a friend to come and speak to us. His rationale was that much of ministry in Uganda is done in a Muslim context. The speaker explained the core tenants of Islam (the Five Pillars), but seemed (both to me and to some other students) to glaze over the problem of Islamic terrorism. The question was asked, but he didn’t give very satisfying answers. He emphatically stated that those who kill in Allah’s name are not “extremists,” because they are not Muslims. He stated they are disobeying the teachings of Islam. However, when asked how one knew that his interpretation of Islam was the correct one, he couldn’t answer, and he said that individual’s actions were not something that he could judge as a Muslim. I wish he had been more strongly challenged by our leadership, but I didn’t want to push him any more than I did. As it was, as a student addressing a visiting professor, I probably already asked too many pointed questions. At any rate, it was a good discussion. My big regret in all of it, is that (even as I write this several days later) we have not yet had a chance to debrief internally as a group of Christian students. Given that many among us are young people with less theological training (I’m literally double the average age of the group), I think a follow-up discussion would be healthy and helpful. One thing that concerns me in these contexts is that we, as Americans, are SO invested in being fair and open that we can fail to take a stand for Christ, and for the truth of who God really is.

Okay, moving on. After visiting with our Muslim friend, we met with the president of the university. His title is technically “Vice Regent,” because, as the Anglican University of Uganda, the Regent of the school is the Archbishop of the Church of Uganda. The vice-regent, whom we met, also studied at TEDS, and is well acquainted with our president, Dr. Dockery, and Amanda, our team leader (who is on staff at TEDS and pursuing her Ph.D. there). This was a very interesting discussion in which we talked about opening more doors of partnerships between TIU and UCU. That’s cool. I’d like to see exchanges go the other way — hosting UCU students in Chicago —, and so would, it seems, many others.

And on that topic, we then met the coordinator of the Uganda Studies Program (USP) at UCU. Undergraduates from places like TIU can come to UCU to spend a semester studying in particular programs. They currently offer emphases in Social Work and Global Health. I was thinking how interesting and valuable it’d be to offer focuses on 3rd world engineering (electrical, electronic, and industrial, specifically) and agriculture. How could you build and grow more effectively to help the under-resourced. Also global economics. But the problem with 3rd world poverty is typically with the leaders of the people, not with the availability of resources. Such seems to be the case in Uganda, like so many other places. For example, a very large oil deposit was discovered in Uganda a few years ago, but evidently the Chinese are moving in and the president is setting up lots of sweetheart deals for himself and his cronies, doing his level best to keep as much of the flow of resources produced by that oil in his own hands and the hands of his friends. It’s my understanding that he has gone so far as to proclaim to the press, “This is my oil.” As long as people at the top prevent the wealth generated by resources like oil (or in Uganda’s case, exports of fruit, clothing, etc) from flowing into the hands of the people, they will always be poor and sick and marginalized. But the human heart is just as dark here as it is anywhere else. Sigh. Come, Lord Jesus, come!

After our discussion with the president, we met for chapel and worship. Beautiful. Outdoor venue. I posted some videos to Facebook. Here’s a picture as well. 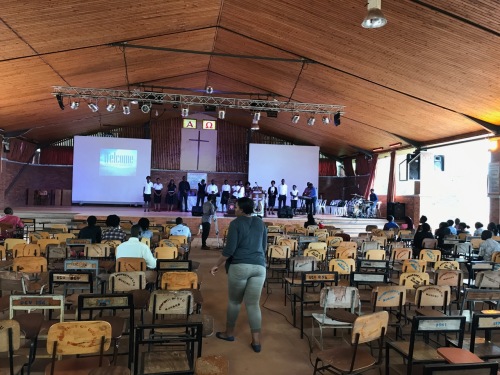 Fantastic service. But I was tired, and found it hard to stay awake and focus, especially given the thunderous rain storm that made it very hard to hear the speaker at times and very easy to hear the rhythmic sound of rain on the roof. I might have communed a little more deeply in prayer than I had planned from time to time. One thing I definitely noticed is that, apart from the Ugandan songs we sung, every worship song sung in English was familiar to me from my time in InterVarsity in the mid-90’s. How interesting! It was actually very powerful for me to be catapulted back 25 years to where I was with the Lord back then, knowing how far and wide I’ve wandered about, and now feeling a sense of being where God has always been taking me. But God is unequivocally at work, even in wilderness wandering.

I don’t know what will come of this experience in Uganda. I certainly don’t know that somehow we’ll “end up” here, but I know that I have obeyed my Father in coming here, that He came before me, that He walks with me, and that He will be here at work among His people long after I’m gone. It was powerful to feel connected to all that.

After worship, we walked to lunch in the mud and the rain. And when we got there, there were no napkins. No way to wash your hands. I’m experiencing this as an ongoing theme in Uganda: Easy to get dirty, hard to get clean.  We ate traditional Matoke and Chapatti again. This time I ordered mine with fish. Reminded me of the fish bowl in the Philippines. In fact, the theme with meat here is that it is all bone-in, and particularly fish is very difficult to work around the bones. Probably won’t get that again, but am trying to sample the broadest variety I can get my hands on. I also admitted at lunch that I need sleeping pills (a little bit of groveling, actually), so I’m working to instigate a bidding war among those who have meds to see who has the strongest and if they’ll share with me.

After lunch, I, along with two other students who are studying for ministry at the undergrad level, went to meet with a group of theology students and shared about our programs. I was hoping to hear from them about their programs at UCU, but they were so interested in us and our programs, that we spent much more time with information flowing from us to them. Such wonderful people, and so interested in studying in the US. I often find it amazing how highly sought after America is … by everyone except Americans. Sigh. At any rate, it was a fun time. A number of them wanted my contact info, and I gave it, so we’ll see where that goes. I’d love someday to host Ugandan students in America. How fun would that be!?

Then I took a nap, and it was glorious. I probably got about 45 min in, and I was totally rejuvenated when I emerged from the room. When I did, I found almost the entire team playing Apples to Apples in the common area, so I brought in a bunch of Starbursts and Skittles to share, and joined them. When the game ended (it was almost over when I got there; they had been playing for 2 hours – FUN!), we all swapped contact info (esp Facebook) so that I could get the group photo album started, and I uploaded the team’s official picture we took on Monday before we left. About time! So, that was fun.

Then at dinner, a number of Ugandan friends from the seminary joined us. I sat with Herbert, whom I really like, and whom I would love to see be among the first to come visit in Chicago sometime. He really would love to do that, I know, but it’s about resources. So, we’ll just have to see what God does.

Lastly, we attended a symposium, hosted by the Honors College at UCU, to discuss culture, success and development. I got to present some of my theories on Kingdom Culture (based on Wolf’s work on Catholic Personality), in a small group setting, and a little bit in the larger group. It seemed to resonate well, and several Ugandans asked for my contact info. So, again who knows where / how that will go.

I have to admit that I’m nervous to the point of scared as I turn in for this my third night in Uganda … that I wouldn’t be able to fall asleep. But I had acquired sleeping pills from one of the other students (Alex, one of my 12 favorites on the trip), so now it’s all about trusting the Lord.

Lover and follower of Jesus, the long awaited King. Husband and father. Writer and seminary student. On a long, difficult, joyful adventure, learning to swim with the current of God's sovereign love and walk with Him in the garden in the cool of the day.
View all posts by Jeff Block →
This entry was posted in Travel and tagged Islam, Missions, Uganda. Bookmark the permalink.