After breakfast together at the guest house, which has become our regular practice, we put on play-in-public clothes — long pants and T-shirts, whether guys or girls — and headed out to a local government owned field. The field is essentially a very large “common area,” equivalent to something an American park district would provide, which can be reserved by local organizations or even individuals (for weddings, etc). In this case, JENGA reserves this field on a weekly basis for their local Child Rehabilitation Outreach (CRO) program. These are kids whom their helping to get off drugs or out of abusive situations. They reserve the field, meet the kids there, and just play. Mostly football (what we’d call “soccer” and various other circle games). In addition to the CRO kids, they literally walk through the main part of town on the way to the field rallying up street kids, all of whom now know that the program is in place and eagerly wait to be summoned by JENGA volunteers to a day of play.

We spent our morning joining local JENGA volunteers in just playing with the kids. We played soccer, I learned a bunch of games involving running around in circles with kids, played duck-duck-goose, let kids climb on us, etc. One of the favorite activities of many of the children was to feel my furry arms and beard. I was quite the spectacle, large furry white man that I am.

We were not permitted to take pictures of the kids, so I have none to post. But our time with the CRO kids was SO rich and SO fun, and we came home very dirty and very tired.

Because we didn’t have enough time to go out to eat for lunch — our original plan —, one of the JENGA volunteers picked up Rolex from a local street vendor, and we had that for a quick hot lunch. Rolex is a common street food consisting of fried eggs rolled in chapati, often with any variety of other ingredients cooked into the eggs or rolled into the role. The locals call it “rolex,” because if you say “rolled eggs” often enough, it turns (at least in Uganda) into “rolex.” So, we had some greasy street food to keep us running, and then headed out for prison ministry.

We planned to visit three prisons this afternoon: a men’s prison, a women’s prison, and a children’s prison. So, we broke into three teams, and dove in. I chose the men’s prison, which turned out to be way up in the mountains. We piled 7 of us into one of the JENGA off-roading jeeps and headed up the mountain. The further we went the worse the roads got, and there were some inclines involved that I didn’t think the jeep was going to be able to navigate. It took an hour and 45 minutes to reach the prison, and by the time we got there, I felt like a tossed salad, and pretty much everything hurt. I have never experienced … never imagined … anything like these roads. Many dirt roads, and where the roads were paved, they were literally stretches of road with a dozen potholes every 10 feet. There were times it was like driving on the moon. But we made it, and after a little stretching, headed into the prison.

As we left the guest house, I was under the impression that we would each have to share a 2-3 minute brief word of encouragement from Scripture. No problem. I wanted to encourage them to think about true freedom — a man is not free because he is not in a cell, he’s free because he is found in Christ. But about 1/3 of the way up the mountain, the JENGA volunteer looks at us and asks, “Who’s preaching?”

JENGA guy: Yes, we’d like one of you to bring the word in a 30 min message, or longer if you want.

JENGA guy: What’s wrong? Do you want to preach for longer than that? That’s fine. We have up to an hour.

Now see, in a situation like this, it doesn’t pay to be the old guy / experienced preacher / seminary student among a group of college students, because it’s impossible for me to pawn this exciting new responsibility off onto someone else. So I volunteered.

So very interesting and exciting to be pushed this far out of my comfort zone. It’s the second time this week that I had the opportunity to preach a complete sermon essentially extemporaneously. This time I felt led to 2 Corinthians 3:17-18:

Now the Lord is the Spirit, and where the Spirit of the Lord is, there is freedom. And we all, with unveiled face, beholding the glory of the Lord, are being transformed into the same image from one degree of glory to another. For this comes from the Lord who is the Spirit. (2 Corinthians 3:17-18)

There were probably about 75 men and 5 women in attendance. I guess it wasn’t just a male prison after all. But the women were separated from the men by a fence topped with barbed wire, so obviously not much interaction there. We preached to both sides of the fence. We arrived 30 minutes late, and they were praising God loudly and excitedly in a courtyard when we arrived. The guards greeted us in the name of the Lord, so that was cool, and they ushered us to a bench up on a raised platform / porch, which was covered by a roof. But the inmates sat in the courtyard.

We introduced ourselves quickly, and then I was up to preach. I spoke through a translator for about 25 minutes, but they weren’t terribly responsive. Neither this group nor the congregation at House of Prayer (where I taught on Sunday) were as boisterous or responsive as I expected them to be as I envisioned preaching to an African audience. Maybe that means I wasn’t very good or they didn’t like my style. Not sure. Could also just have been misaligned expectations. Who knows. But I feel like I said what God wanted me to say, so that’s the important thing.

After me, another member of our team, Zack gave a brief 15 min message as well, which actually followed up my message perfectly. That was worshipful. I called for people to give their lives to Christ, Zack, reinforced it, and then the chaplain got up and took it all the way to altar call. In the middle, a third teammate, Taylor read Psalm 139. And then the service closed. Amanda, our team leader, who went with our group to the men’s prison, felt that it had all come off well, so … woohoo.

Unfortunately, we were not allowed to take any pictures at the prison, so I can’t share any with you. I do have a few pictures of the gorgeous high-altitude mountain vistas, but I’ll pick the best of those from the whole trip and share them toward the end.

We got down the mountain a lot quicker than we got up it. Once back to the house, we rushed into town for dinner at a local Indian restaurant. It was really good. We each ordered something, but ended up doing a lot of sharing. It was also fun explaining various foods and cultural realities to the team, many of whom were unfamiliar with them. 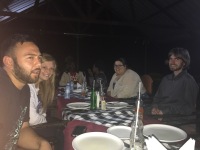 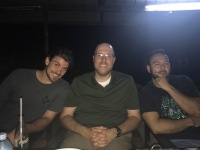 After dinner, we came back to the guest house and played cards late into the evening. We had been playing a card game called “President” the prior few nights, which Taylor had introduced to the group. It is an adaptation (simplified version) of a game I learned in college, which we called “toe jam” … along with a few other less-family-friendly names in my BC (Before Christ) days. So, just for something different, I tried to teach the team this more complicated version. I definitely felt my age doing that, because there was a tone of pushback and whining from the younger members of the team… “I can’t do it” and “It’s too hard,” etc. Sigh. Kids these days. But they eventually learned, and we had fun playing. But I seriously doubt they’ll want to stick to the “advanced” version of the game.

And with that, there was evening and there was morning, the seventh day. See you tomorrow.

Lover and follower of Jesus, the long awaited King. Husband and father. Writer and seminary student. On a long, difficult, joyful adventure, learning to swim with the current of God's sovereign love and walk with Him in the garden in the cool of the day.
View all posts by Jeff Block →
This entry was posted in Travel and tagged Missions, Preaching / Homiletics, Uganda. Bookmark the permalink.