Unbelievably, we leave tomorrow to fly back to the States. Although there were moments on this trip when I felt like we’d been in Uganda for months, not days, now suddenly it seems impossible that the trip is almost over. But the truth is that I’m very anxious to return home to my family, church, and the rest of life.

But before I do… It’s Sunday. Time for church.

We had breakfast as usual at the hotel, and then headed into town (Kampala) to attend the 10am service at Watoto Church. Watoto the largest church in Uganda, frequently referred to as the Willow Creek of East Africa. It’s a large (even by US standards) multi-site church, which means in 12 locations, mostly clustered around Kampala (the capital of and largest city in Uganda). It was a pretty modern place, set in a large theater-like auditorium in the middle of the city. There wasn’t much to distinguish it from the outside, but inside, it looked much like a megachurch in the US to look… lights, big stage, auditorium seating, fancy computer equipment, giant screens, etc.

I liked the people on stage. I enjoyed the music. It was in English, but I didn’t recognize a single song. The worship leader and pastor were both winsome and engaging. I liked the sermon — it was about covenant relationship in the context of the family. Josh Mugabi (the speaker) talked about the covenants that should exist between husbands and wives (Malachi 2:13-14), parents and children (Ephesians 6:1-4) and brothers and sisters (Proverbs 17:17; c.f. Genesis 4). I appreciated his message, although there were definitely times when he was using the word “blessing” that I wondered how the congregation was defining the word. I had flashes of concern that, although Pastor Josh never explicitly said this, if someone in the audience was predisposed to a prosperity gospel view of the universe, they could have read that into his message. That said, for those who already have a healthy theology of blessing, it was a great sermon. All up, I think God attends Watoto — the first and most significant criteria for the health of a church —, plus I really enjoy and profited from being there. 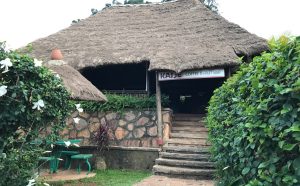 After church, we had a beautiful lunch back at the hotel. That was followed by some free time, which many used to play cards, but I used to journal and write, and then spend a couple hours hauled up in the hotel’s coffee bar to debrief as a team.

After that, we snagged a light snack, and headed back into town for a show at the Ndere Cultural Center (also on Facebook). It was a great show, and very interesting. Musical styles from around East Africa. Lots of drums and dancing and crazy feats of balancing things on the dancers’ heads. My favorite / the most astounding thing I saw was a group of men playing these large drums that were balanced on their heads while they danced around the stage. Also women with 4 or 5 jars stacked in a tower, balanced on their heads while they violently danced around the stage. It was amazing. And the drum circles were amazing to. It was a great time, and gave us some interesting cultural insights. I’m really glad we went.

At the end — and this was my favorite part — the entire audience was invited up onto the stage to dance with together with the performers. This was a) for fun, and b) to demonstrate racial, ethnic, and national unity. See, we can all dance together!

My second favorite part of the show was the MC. The guy was really fun, and impressive too. The dancers could dance, but when this guy asked where you were from, it seemed like no matter where it was, he was able to speak a few words of the language there or talk intelligently about a current event or make fun of a cultural norm, or whatever. He was really great. All in all a good show. I promise I’ll post the name as soon as I get it. It’s worth checking out.

The show was over 3.5 hours long, and took us pretty late into the evening. We stopped back by Java House, but I don’t think we got there until after 10, and they closed at 11. I stumbled into bed at about 11:30 looking forward to flying out the next day.

Lover and follower of Jesus, the long awaited King. Husband and father. Writer and seminary student. On a long, difficult, joyful adventure, learning to swim with the current of God's sovereign love and walk with Him in the garden in the cool of the day.
View all posts by Jeff Block →
This entry was posted in Travel and tagged Missions, The Church, Uganda. Bookmark the permalink.