It was God’s will to crush Him 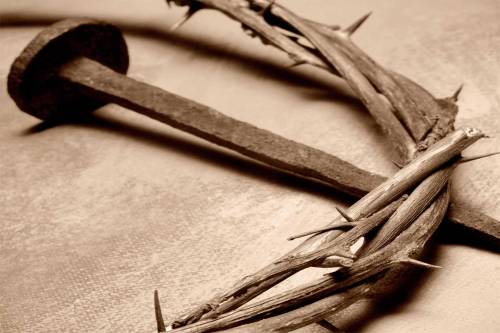 Seven hundred years before Jesus was born, the prophet Isaiah wrote about Him, and about “Good Friday,” when Jesus would be “pierced for our transgressions and crushed for our iniquities.” Isaiah knew, and Jesus knew, that “the punishment that brings us peace would be upon Him, and by His wounds we would be healed.”

The cross was not a defeat or a failure. It does not primarily demonstrate the strength of evil or the brokenness of this world. What Rome (and satan) intended to be merely a brutal instrument of torture, humiliation and criminal execution, God transformed into the symbol of salvation for anyone willing to trust Him — to lay down his pride, to acknowledge his desperate need, and to surrender his heart to the King. The cross of Christ demonstrates God’s amazing love! It shows the unbelievable lengths to which He was willing to go in order to adopt you as His child. God did not spare even His own Son, but gave Him up for us all (Romans 8:32).

Let us remember, with reverence and hope, the cross of Christ…

1 Who has believed what he has heard from us?
And to whom has the arm of the Lord been revealed?
2 For he grew up before him like a young plant,
and like a root out of dry ground;
he had no form or majesty that we should look at him,
and no beauty that we should desire him.
3 He was despised and rejected by men;
a man of sorrows, and acquainted with grief;
and as one from whom men hide their faces
he was despised, and we esteemed him not.
4 Surely he has borne our griefs
and carried our sorrows;
yet we esteemed him stricken,
smitten by God, and afflicted.
5 But he was pierced for our transgressions;
he was crushed for our iniquities;
upon him was the chastisement that brought us peace,
and with his wounds we are healed.
6 All we like sheep have gone astray;
we have turned—every one—to his own way;
and the Lord has laid on him
the iniquity of us all.
7 He was oppressed, and he was afflicted,
yet he opened not his mouth;
like a lamb that is led to the slaughter,
and like a sheep that before its shearers is silent,
so he opened not his mouth.
8 By oppression and judgment he was taken away;
and as for his generation, who considered
that he was cut off out of the land of the living,
stricken for the transgression of my people?
9 And they made his grave with the wicked
and with a rich man in his death,
although he had done no violence,
and there was no deceit in his mouth.
10 Yet it was the will of the Lord to crush him;
he has put him to grief;
when his soul makes an offering for guilt,
he shall see his offspring; he shall prolong his days;
the will of the Lord shall prosper in his hand.
11 Out of the anguish of his soul he shall see and be satisfied;
by his knowledge shall the righteous one, my servant,
make many to be accounted righteous,
and he shall bear their iniquities.
12 Therefore I will divide him a portion with the many,
and he shall divide the spoil with the strong,
because he poured out his soul to death
and was numbered with the transgressors;
yet he bore the sin of many,
and makes intercession for the transgressors.

Lover and follower of Jesus, the long awaited King. Husband and father. Writer and seminary student. On a long, difficult, joyful adventure, learning to swim with the current of God's sovereign love and walk with Him in the garden in the cool of the day.
View all posts by Jeff Block →
This entry was posted in Bible Stories and tagged Crucifixion / The Cross, Good Friday, Isaiah. Bookmark the permalink.